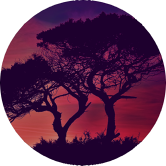 the box holds her heart

Four hundred years ago Ixi ran away from her provencial village home, accused of dark magic and threatened to burn. She ran into the shadow of the faewood, expecting to die- better in the forest than at the hands of those who thought her murder was justified and righteous. But in the woods she met the witch, and she was saved. Yet this isn't the end of her story.

Four hundred years ago Ixi fell in love with the woman in the woods with the cloven hooves and agreed to her terms. She would eat the smoking peach and in exchange, she'd gain the agency she'd never had in her old life. The rituals were grueling and difficult and required sacrifice, but the power was worth it. She'd never have to answer to anyone else again just for living.

Not so many years ago something pulled their dark and cozy woods out of time and place. Ixi and the Wood Woman could no longer walk past the edge of the forest. As if cut by a knife, the shady purple woods fell away to harsh, yellow desert. At the border Ixi puts her fingers out to let the sunlight touch her skin; she pulls them back in pain and fear. Left on her fingertips were golden scars where the light touched.


This is a gift, it comes with a price
Who is the lamb and who is the knife?
Midas is king and she holds me so tight
And turns me to gold in the sunlight

Once she was a girl

and in some times and places, girls did what they must to survive